Consists of records relating to grant applications and accounting. 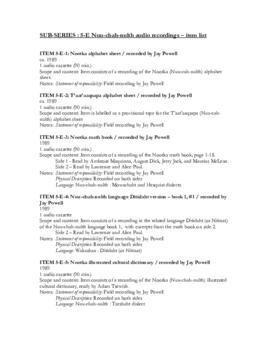 Contains the records and drafts used in the creation of the <i>Chinook Jargon Dictionary.</i>

Consists of photographs taken for the series of education books called Counting books in the Big Book series. These images were staged specifically for this purpose and included many traditional activities, such as digging for camus bulbs

Consists of photographs in the form of negatives, prints and slides from Jensen’s visit to the Gitksan villages in 1975, and from Jensen and Powell’s work and life in the Eastern villages between 1977 – 1982. The images include photographs that were used to illustrate the language books being produced, and other photographs that documented the culture and way of living in these communities.

Consists of notes made by Powell during research on the language and culture of the Quileute.

Consists of field notes taken during Powell’s research into current uses of Chinook Jargon by the Quileute, as well as correspondence with other academics and linguists.

Consists of notes and correspondence relating to the creation of the Gitksan language books and teaching manual.

Consists of notes and research relating to the creation of the books Musqueam Language: Book 1 and Hunq’um’i’num for Kids: Books 1 & 2, as well as research done for the Shalalath Lilooet language and culture program.

Consists of photographs taken of historical prints and artefacts relating to the Quileute. These were taken at a number of institutions, including Brigham Young University in Utah, the Washing State Archives in Olympia, The Museum of Natural History, the Smithsonian, the Museum of the American Indian Heye Foundation, the American Philosophical Society in Philadelphia, and the University of Washington Burke Museum.

Consists of photographs taken of people and events in Alert Bay and surrounding Kwak’wala speaking communities. Photographs document the activities of the era such as potlatches, fishing, trapping, and activities surrounding the opening of the U’Mista Cultural Centre, and many were taken for the purpose of using them in educational language books.