Materials in this sub subseries consist largely of photographs taken by McLennan and research assistants (J.L. Gijssen and Mila Cotic) of bent wood boxes and other artifacts that would benefit from infrared photography as part of the transforming image exhibit. These photographs were all taken at various museums and institutions that were visited by McLennan, or if photographs of the artifacts existed, McLennan received copies of these from various institutions.

Sub subseries consists of research files, including research conducted by McLennan at various museums and cultural heritage institutions regarding artifacts that could benefit from the infrared photography project Transforming Image, photographs of the exhibit at MOA and in Port Alberni and research on infrared photography. 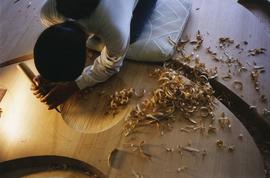 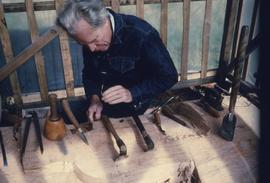 Image of Bill Reid carving a wooden sculpture. Carving tools are visible on top of the sculpture. 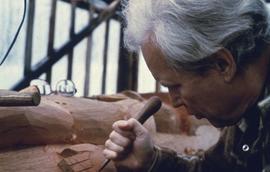 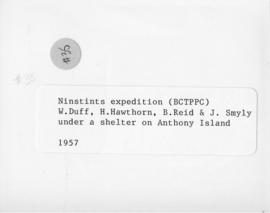 [Back of photograph of Ninstints expedition]

The back of a photograph of Wilson Duff, Harry Hawthorn, Bill Reid and John Smyly under a shelter on Skunnggwaii llanas (Anthony Island). The image was taken during the Ninstints expedition to retrieve 11 totem poles from the area. Back of item #a035183-1. 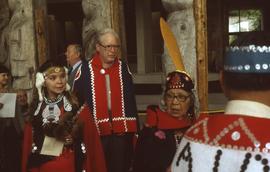 Image of Bill Reid standing near totem poles at the Museum of Anthropology, with others dressed in traditional clothing. 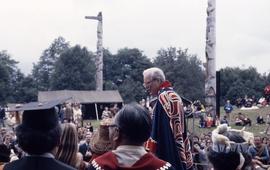 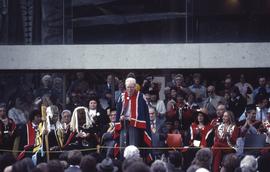 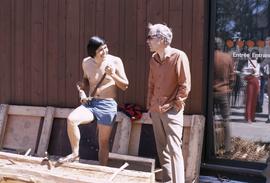 Bill and Robert at Expo

Image of Bill Reid and Robert Davidson standing next to wooden carving in progress. Information on the back of the image credits the photograph to Wilson Duff, Museum of Anthropology curator. The date and place written on the image is 1968 in Montreal. 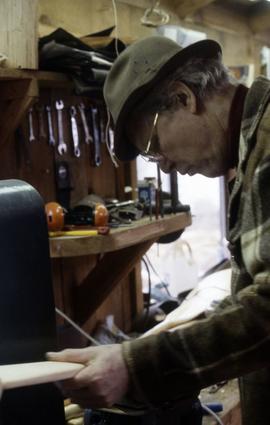 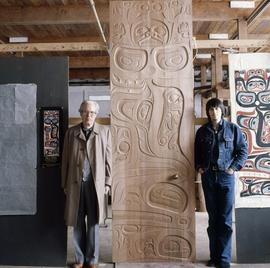 [Bill Reid next to artwork]

Image of Bill Reid (left) and Jim Hart (right) standing next to a large wooden carving, possibly a door.