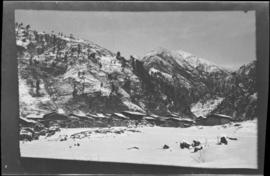 Item is a negative showing several snow covered wooden buildings, the 90th Punjabi quarters, nestled in front of the Yutang mountains. The landscape is covered in snow. 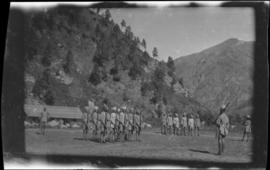 Item is a negative showing two groups of unidentified Punjabi soldiers standing at attention. There are two men standing in front of the groups, holding guns with bayonets. There are mountains in the background.

A Brief History of Oweh Community 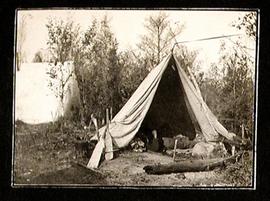 A Camp on the Hayes River

Item is an image of a camp with a tent in the background and an open tent in the foreground. According to annotations, photograph was taken on the Hayes River between York Factory and Norway House, Manitoba 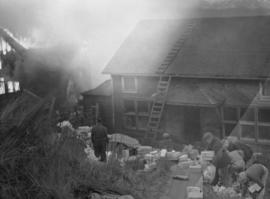 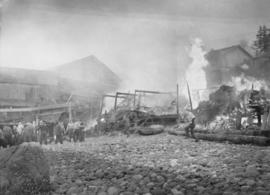 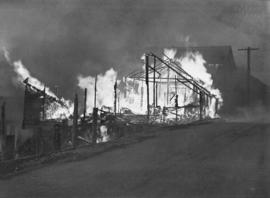 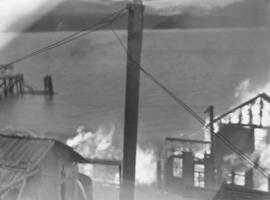 Buildings are ablaze. Harbour is visible in background 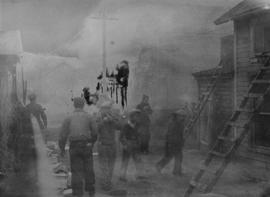 Six people are walking amongst buildings and smoke. Centre is damaged 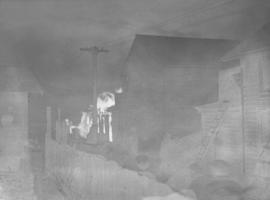 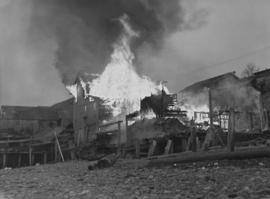 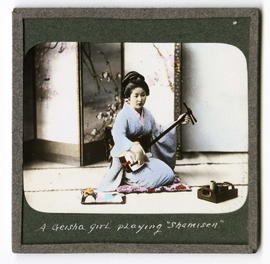 Item is a photograph of a geisha wearing traditional clothing playing a shamisen. Possibly by photographer Kozaburo Tamamura

Written on back of print: "A Quatsino Siwash old type photo by W. Ben Leeson. The heads of the babes bound to make this shape."

Written on front: "A Quatsino Spruce"

A Study of Aiyetoro Community: Aiyetoro (The Land of the Apostles)

A Study of Amassoma Community in the Rivers State

A Study of Aviara Community in Isoko Division of Midwestern Nigeria

A Study of Bakana Community