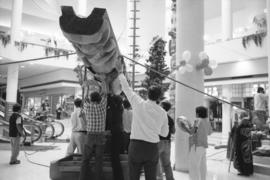 Image is of a group of people standing underneath a totem pole as it raises into the air. Multiple ropes extending from either side of the pole are prominent. Norman holding a skin drum and Josiah holding a staff stand on the right side of the image. Balloons decorate the mall pillars. 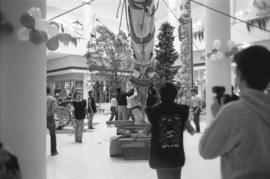 Image is of a totem pole nearing its upright position. Multiple ropes extend from all sides of the pole. Tait family members and unidentified persons stand in various positions, watching the process. Balloons decorate the mall pillars. Another totem pole stands upright in image background. Isaac stands looking up at the center of the image foreground. 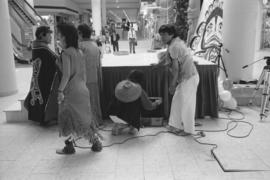 Image is of Norman, Reva, and unidentified persons near a small stage at the pole raising location in Capilano Mall. 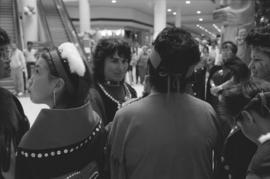 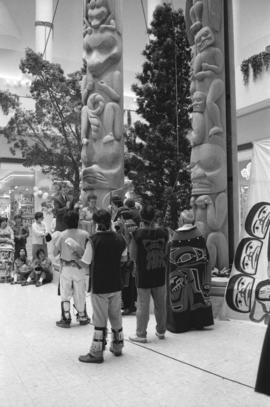 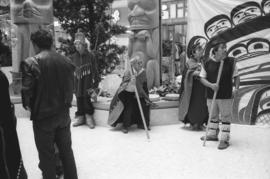 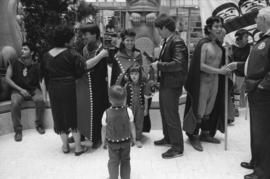 Image is of ceremony guests conversing in front of mall platform that holds two totem poles. An unidentified object (painted cloth banner?) is visible in background on right side of image. 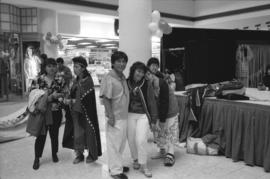 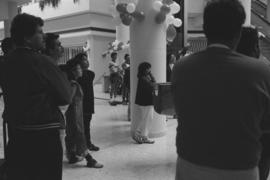 Image is of pole raising guests looking towards the right side of the image. Reva stands near a mall pillar that is decorated with balloons. Isaac and his partner (?) stand at a slight angle behind Reva, near a group of unidentified persons. Unidentified guests stand near a mall pillar in image background. 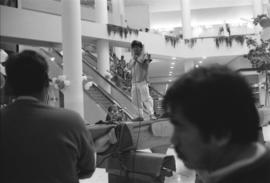 Image is of Norman standing atop a totem pole as he uses a microphone to deliver a message to guests who are gathered on the ground. Individuals gathered on an escalator are visible in image background. 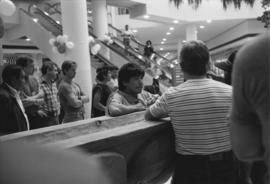 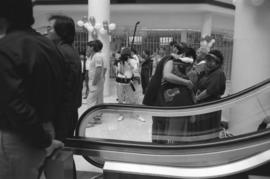 Image of Tait family members embracing near escalator. Man in background is videotaping them. 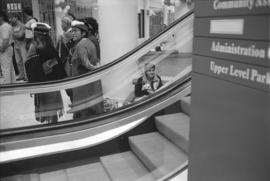 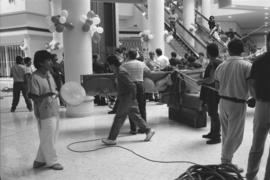 Image shows the pole with pulley ropes set up to raise it. A number of men are holding on to the ends of the rope. Spectators are beginning to gather. 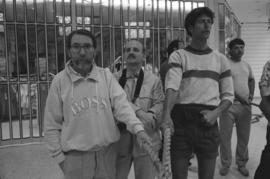 Image shows three men holding on to end of one of the pole raising ropes. 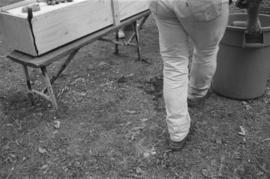 Image is of Ron relocating trash receptacle to be closer to longer component of steaming apparatus. 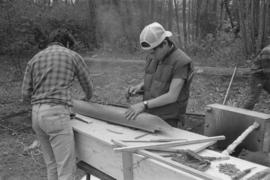 Image is of Chip and Isaac making adjustments to model canoe as it rests face down on top of longer component of steaming apparatus. Isaac holds a hammer in one hand as he steadies the model canoe with the other. 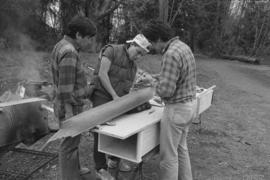 Image is of Norman, Isaac, and Chip making adjustments to model canoe as it rests face down on top of the longer steaming apparatus component. Steam issues from box-like component behind them. 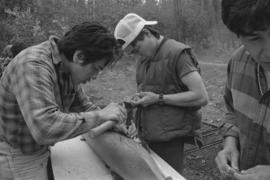 Image is of Chip, Isaac, and Norman making adjustments to model canoe. Chip uses a hammer and nail(?) to puncture underside of model canoe. 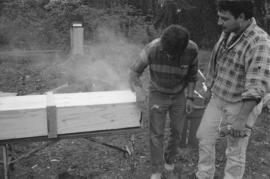 Image is of Norman and Ron inspecting second, longer component of steaming apparatus. Steam is visible, issuing from within.