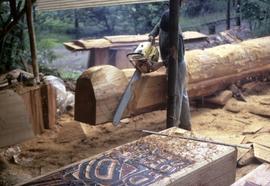 Image depicts a man, probably Douglas Cranmer, in the early stages of carving the St. Catherines, Ontario totem pole. The pole is outside. He is preparing to use a chain saw to make the early cuts to a pole. Markings are visible, showing where he will cut.

Image depicts a small scale totem pole which seems to be situated in a cemetery. The bottom figure seems to be human and the top an eagle. 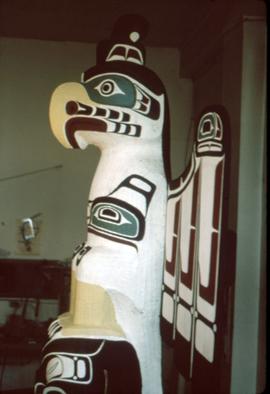 Image depicts the top portion of what may be a small scale totem pole. The image depicted seems to be a Thunderbird, painted in black, white, red, green, and gold. There is another figure below this, but it is not discernible in this photo. 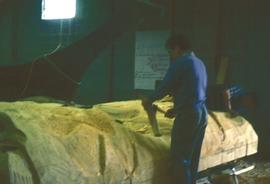 Image depicts a carver, possibly Douglas Cranmer, working inside on what may be a totem pole. The carving is still in the early stages and it is difficult to tell what will be depicted.