Consists of articles and other records used by Powell to research Chinook Jargon and its historical uses. Powell referenced the sources in the unpublished manuscript Chinook Jargon: The Language of Northwest History.

Consists of articles, books, reports, maps, newsletters, and other information gathered by Powell as research into the culture and language of the Quileute. The research was used for both his dissertation and for subsequent education and teaching materials.

Consists of research materials on the Shuswap language and culture, mostly work done by Aert Kuipers, a Dutch linguist who documented a number of British Columbian languages in the mid-twentieth century.

Consists of research materials referenced in the creation of the Gitksan language and curriculum books. Includes works such as the Classified word list for B.C. Indian Languages by Larry Thompson and the Gitksan Dictionary by Hindle and Rigsby.

Consists of reports done by Powell for the Kitamaat Village Council on the traditional use and occupancy of land as it relates to a number of issues, such as specific resource areas and land under proposal for non-traditional uses.

Sub-series consists of photographs taken during the renewal process.

Sub-series consists of articles, reprints, and Photostats collected by Duff for his Anthropology lectures at the University of British Columbia. 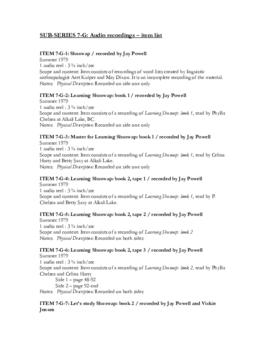 Consists of records relating to the Quinault language. Powell originally hoped to work with the Quinault in 1969 during his graduate studies, but there was already a linguist with the community. In the 1980s he was asked to work for them on the basis of the success of the Quileute books, but he was committed to other projects at the time. Finally in 1995 he went down to Quinault territory again but the promised funding did not materialise. The records in this series are those collected by Powell during the final period of communications with the Quinault.

Consists of the manuscript for the Gitksan Teaching Manual and the Western Gitksan alphabet sheets.

Consists of notes and copies of two publications: By Punt to Kitlope (curriculum booklet 2006); two copies of the Haisla Unity Feast Book, called Our Lands, Nuyem and Stories (2005); 160 km of Haisla History: Guidebook for a visit to the Kitlope; and Our Nuyem Says… (a school curriculum).

Proud to be Musqueam