File consists of images from Duncan, BC. Subjects include an old church (Butter Church?), a carving, and a man identified as Dominic Joe wearing a straw hat.

Additional Photos Not in the Book

Subseries includes photographs and other graphic materials related to the editing of the book. Subseries came with a note reading: "Additional photos not in the book. OK on computer."

Item is a draft of the section "Learning Our Ways" in the book, pages 83 to 91.
Item is a typed copy of the draft with annotations in red and black pen, and post-it and paper notes with more annotations.

Series is divided into two sub-series. Subseries A, Interviews, contains materials gathered by the Tahltan Native Studies Committee with information about the Tahltan culture. Subseries B, Class materials, contains recordings made by Karen J. Clark and some of her students as part of class activities or to be used in class

Item is a X̄a’islak̓ala language course, with exercises. The course is based on a wordlist compiled in 1974 by linguist Hein Vink. Vink was helped by Jeffrey Legaic, Irene Starr, Amelia Grant, Kay Grant, Nelson Grant, and others. Accompanying the course are sound recordings, located in the Sound recordings series within this collection.

This is Haida records

Series consists of images found in or related to Carter's 1969 published work. Focus is on photographic representations of First Nations communities and individuals throughout Haida Gwaii. Geographic locations include Anthony Island (Ninstins), Masset, Skedans, Skidegate, Tanu and Yan. Series also contains images related to the 1969 Masset pole raising ceremony in honor of Robert Davidson, Jr. Files are generally arranged chronologically according to subject matter and/or locality. Except where noted with square brackets, the titles for files and items in this series were taken from annotations on the original material. 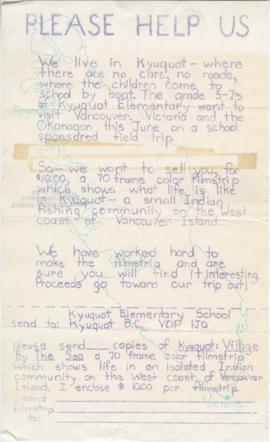 Series includes audio and video interviews with Agnes Alfred and other members of the Kwakwaka'wakw community. Series also includes translations of some of those interviews or sections by Daisy Sewid-Smith

Subseries includes handwritten translations of the audio and video interviews.
Translations were done by Daisy Sewid-Smith and sent to Martine J. Reid for editing.