Sub-series consists of slides which were used for research and possibly teaching purposes. Among them are slides relating to artists such as Robert Davidson, Bill Reid, Jack Shadbolt, Ron Hamilton, and Dorothy Grant. Also included are slides of objects from MOA, the British Columbia Provincial Museum, Royal Ontario Museum, and the Glenbow Museum. Art objects featured in the slides include masks, totem poles, rattles and pipes from the K’san, Tsimshian and Tlingit.

Sub-series consists of research in the form of taped interviews for various projects. Tapes consist of interviews with artists such as Dempsey Bob, Ron Hamilton, Doreen Jensen, Corrine Hunt, Pam Holloway, Connie Dickens and others.

Sub-series consists of Halpin’s various applications for grants to support her research projects. These applications outline the scope and needs of the proposed projects.

Sub-series consists of mostly textual records in addition to photographs, negatives, slides and contact sheets. The textual records are both handwritten and typed notes, as well as publications of other authors. Research topics undertaken by Halpin include Tsimshian art, Marius Barbeau’s work, the Kitwancool, Gitksan art and William Beynon. Photographs and negatives are mostly of masks, totem poles and rattles. 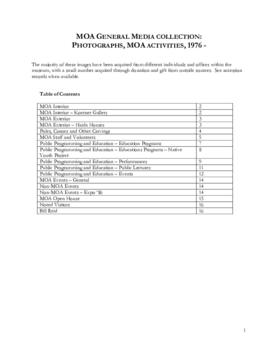 Consists of photographs documenting the work of various artists that assisted Norman Tait in the period that Jensen was photographing his work. Most of the photographs included in this sub-series are of the various side projects that the artists would spend time on whilst major projects such as totem poles were in progress. Artists photographed in this sub-series are: Norman Tait, Isaac Tait, Robert “Chip” Tait, Ron Telek , Wayne Young, Valerie Tait, Alver Tait, Bernice __ .

Consists of photographs taken of social events and carvers connected to the Tait project, but not officially part of the project itself. Jensen was invited to a number of feasts and parties hosted by the Tait family, which she often photographed, making a gift of the pictures to the family members. At one of the parties, a family member performed a dance wearing a mask made to represent Jensen and her camera, complete with the sound of the shutter. In addition to events, Jensen met a number of artists, both Aboriginal and non-Aboriginal, through her acquaintance with the Taits, and she often photographed them.

Consists of photographs taken by Jensen for the creation of the book Where the People Gather, which covers the creation of a pole by Norman Tait and his team over a number of months. Includes some later photographs showing changes to the pole due to ageing.

Subseries consists of meeting minutes and agendas, draft and final copies of the museum's exhibitions and programs, invitations, handwritten notes, printed presentation slides, and other textual records related to the administrative activities and responsibilities regarding the Museum of Anthropology’s External Advisory Board.

Subseries consists of correspondence, memoranda, brochures, various UBC faculties' advisory committees' documents, external review of the museum, and other general administrative records related to the activities regarding the Museum of Anthropology’s External Advisory Board.