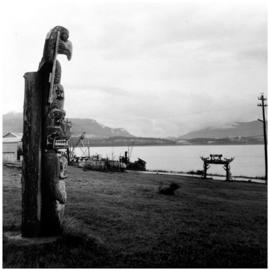 Grave marker in graveyard at I:yem on Fraser River near Yale

Image of a gravestone in the shape of a cross, with the words "In Memory of Our Ancient Grave. Hundreds of Remains." This cemetery is near Yale at I:yem, near today's Saddle Rock highway tunnel.