Materials in the ‘Military Period’ file include ten letters written to, or by, Lt. Col. Parker while on duty as the Commander of the Military Forces in Tibet. Two other letters were written by Sir Charles Bell in which Bell arranges to meet up with Lt. Col. Parker and an escort on his return journey from Lhasa. One additional letter is handwritten in Tibetan and stamped with ‘British Trade Agency – Gyantse – Tibet’ (which suggests that it may be from Parker’s military period), but it is not kown who authored it or when it was created. Five of the letters are written in Tibetan and translations and transcriptions for four of the five letters are available in hard copy and on compact disc (see ‘Notes’).

Of significance among the letters written in Tibetan is correspondence from Lt. Col. Parker to the 13th Dalai Lama in which Lt. Col. Parker states that he has received and inspected the troops from the Dalai’s personal escort and suggests that they be kept for training. In this letter Lt. Col. Parker also raises question on military dress and deportment, specifically, the length of the officers’ hair (a translation of this letter was provided by Father Donald but no original copy of the translation exists). An original draft of this letter, written in English by Lt. Col. Parker, is also included in this file. A second letter is from the Dalai Lama to Lt. Col. Parker and is an acknowledgement of Parker’s training of Tibetan soldiers. This letter is written on rice paper and includes the Dalai’s official ink seal and an envelope with the Dalai’s wax seal and a postmarked Tibetan stamp. Three other letters were sent to Lt. Col. Parker from officials of the Tibetan government. These letters are also written on rice paper and ink stamped with official seals. The first of these letters is written by a member of the Tibetan Supreme Council (known as Shapes or Shapees) and is a response to Lt. Col. Parker’s questioning of hair length of the Tibetan troops, and includes explanations of cultural and religious differences. The second letter is from the minister responsible for the Tibetan military in which permission is granted for training of the Tibetan troops, and the sending of further troops to be trained. The third letter is written by two Tibetan Officers in which praise is given to one of their officers along with a request for his return. Of those letters mentioned above, translations and transcriptions are available for the letters written from the Dalai and the officials of the Tibetan government, and accompany the series.
The five other letters in this series include four that were typewritten by Lt. Col. Parker in English: two are from his military period; two others were written decades later to the editor of a publication. As mentioned above, one was written in Tibet and has not been translated. The two letters from his military period are lengthy and provide significant details of Lt. Col. Parker’s perceptions of his work, the people, the country, events and festivities and are an important accompaniment to many of the prints in Photograph Collection A.

Materials in the “Other Correspondence” file consist of more recent records. Two letters from 1961 relate to an address Lt. Col. Parker accepted to give to the Victoria Section of the Royal Over-Seas League about his experience in Tibet. The two other letters also relate to Lt. Col. Parker’s time in Tibet and were sent to the editor of “Country Life.” The first letter (dated 1966) describes Lt. Col. Parker’s unique experience of being the first European to see a Takin, “the rarest mammal in the world,” while the second letter (dated 1977) discusses a pony that Lt. Col. Parker bought in the early 1920s. The file also contains a letter (dated 1985) from the Office of Tibet in New York City acknowledging receipt of a donation for $20.00 along with a brief update on certain individuals. This letter is signed by two people; one, “T.C. Tethong,” was the translator for the 14th Dalai Lama in the 1960s.

Series consists of material related to books written and illustrated by Stewart. Material includes collected research, notes, sketches and illustrations, photographs, correspondence, book drafts, and pre-press materials. Material is grouped into subseries based by book. The series does not contain material related to all of Stewart's publication. The first subseries contains the first book that Hilary wrote, but did not publish.

Series consists of six sound recordings, digitized from three cassette tapes. Recorded content includes Xa'islakala vocabulary and sentence exercises, along with compiled segments of radio reports and interviews regarding events in and around Kitimat in the 1970s and early 1980s. Recorded language materials are intended to be used as supplementary to the textual course materials.

The research reports were written by students of the Department of Education at the University of Ibadan. Reports cover studies of various communities is western Nigeria. Collection also includes a map showing the location of the villages, two books published by Jack Lieber, and a piece of correspondence sent to him.

Series consists of photographs, object descriptions, background summaries and bibliographic citations documenting the W. and M. Koerner Ceramics Collection. The binders comprise seven volumes organized according to region and time period, as well as a catalogue of the collection. The additional textual material is a copy of the collection catalogue in the binders; there are some differences between the two versions and it is unclear which is the more recent version.

Series includes correspondence related to the research and language documentation project and the book project. Correspondence is between Martine J. Reid and several people and institutions.

Series consists of artists’ statements, cards, diagrams, lecture notes, pamphlets, reports, student assignments, and syllabi relating to David Dunnett Cunningham’s responsibility as an instructor of Anthropology 431: Museum Principles and Techniques, and 432: The Anthropology of Public Representation, and a community course, Introduction to the Museum of Anthropology.

Series consists of records pertaining to exhibitions at the Museum of Anthropology from the 1960s to the present day, including programming and events related to specific exhibitions. Material includes exhibition press releases, invitations, proposals, catalogues, and programmes. Records of this series are arranged into files for each represented exhibition, organized chronologically.

Series consists of images found in or related to Carter's 1966 published work. Focus is on photographic representations of First Nations communities along B.C.'s North coast, including the Xwemelch'stn (Coast Salish), Kynoc, Kitisug, Klemtu and Tsleil-Waututh nations. Files are generally arranged chronologically according to locality and/or subject matter. Except where noted with square brackets, the titles for files and items in this series were taken from annotations on the original material. 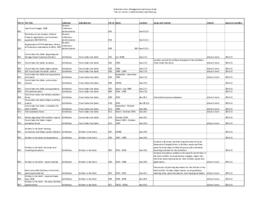 Files in this series relate to the various roles Harry Hawthorn has fulfilled at the University of British Columbia as an anthropologist, a professor (and later head of the Anthropology department), and as the first Director of the Museum of Anthropology. This series consists of correspondence, slides, photographs, negatives and research notes.

Slides, photographs, negatives and notes relate to the various research trips undertaken by Hawthorn in B.C. from the late 1940s to the late 1950s. Some slides document a totem pole salvage expedition on Anthony Island, B.C. in 1957. Some of these slides were used in the production of George MacDonald’s book, Ninstints: A World Heritage Site. Other slides document miscellaneous events relating to Museum of Anthropology exhibitions and research, as well as other events such as Sports Day on the grounds of the Alberni Residential School and the carving of a 20’ long 2’ wide canoe, which took place at a regatta on May 24, 1948. Series includes negatives of totem poles, stories collected from Mungo Martin and notes, mostly written in an indigenous language.

Illustrations and other artwork

Series consists of illustrations and other artwork made by Stewart, either for personal purposes or to be used in publications authored by other people. In addition to the artwork, the series also includes research, photographs, and correspondence related to the production and publication of the works. The series divided into four sub-series:

A - Personal illustrations and artwork
B - Images: Stone (by Wilson Duff)
C – Wisdom of the Elders (by Ruth Kirk)
D – Antiquity (by Dale Cross)

Series is divided into two sub-series. Subseries A, Interviews, contains materials gathered by the Tahltan Native Studies Committee with information about the Tahltan culture. Subseries B, Class materials, contains recordings made by Karen J. Clark and some of her students as part of class activities or to be used in class