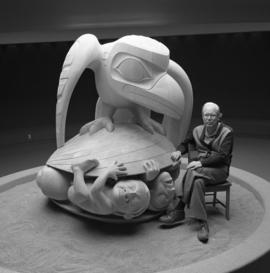 Image of Bill Reid sitting next to his sculpture, Raven and the First Men. The photograph was taken by William McLennan in the Museum of Anthropology.

File contains images of the exhibit My Ancestors are Still Dancing. In addition are textual records relating to the exhibit such as budget and outlines.

File contains images of Robert Davidson and the Rainbow Creek Dancers performing. In addition are digital files taken by Steven Muchnick and Eric Milliren of the event as well as images of the Museum of Anthropology and objects in a private collection.

File contains images of Robert Davidson and his work featured in the exhibit <i>Raven Bringing Light to the World</i>. This exhibit was on at the Museum of Anthropology, UBC in 1986.

File contains images from the Northwest Coast collection at the Canadian Museum of Civilization. There are also images of CMC's <i>Treasures of the Tsimshian</i> exhibit that ran from November 2, 2007 – January 6, 2008.

File contains copies of correspondence between David Cunningham and the K'omoks First Nation regarding a mask that was lent to a travelling exhibit titled "Written in the Earth".

File contains photo-copies of images of First Nation community members in Alert Bay and at St. Mike's Residential School. The photographs were taken to community elders who had been at the residential school so that they could annotate the photographs. Not all of the images in the file were used in the exhibit.

File contains photo-copies of images of First Nation community members in Alert Bay and at St. Mike's Residential School. The photographs were taken to community elders who had been at the residential school so that they could annotate the photographs.

Subseries consists of records relating to research on residential schools that led to the production of the exhibit Speaking to Memory: Images and Voices from St. Michael's Residential School, held at the Museum of Anthropology, UBC.

Tsimshian treasures from the Dundas collection

This subseries consists of records related to the traveling exhibit that came to MOA called <i>Treasures of the Tsimshian from the Dundas Collection.</i> Records include draft correspondence, and draft exhibit photos and text (including case labels).

Tsimshian treasures from the Dundas Collection

File contains print outs of catalogue records of Tsimshian artifacts featured in the Dundas Collection Exhibit hosted at MOA from February to June 2008.

This file contains the beginning stages of exhibit design for the <i>Signed Without Signature</i> exhibit. This file is divided into two parts: concrete wall, and window wall photo. These refer to structural elements in the gallery space where objects and signage were to be displayed.

File contains one spiral bound book (unpublished) containing photographs of the Signed without Signature exhibition and events, as well as a review of the exhibition.

Case and all labels

File contains copies of the labels and cases featured in the <i>Signed without Signature</i> exhibit.

File contains text used in the exhibit <i>Signed Without Signature</i>.

File contains copies of artifacts labels for some of the pieces featured in the <i>Signed without Signatures</i> exhibit.