File consists of correspondence from 1966 and 1967 between Wilson Duff and K.O.L. Burridge, of the Pitt Rivers Museum, regarding Haida potlatch masks. Included is correspondence from 1902 between Franz Boas and E.B. Tylor, which notes a discussion between Charles Edenshaw and John Swanton. The file also consists of b&w photos of the masks and the article "The Haidas," from Harper's New Monthly Magazine, dated June-November 1882. 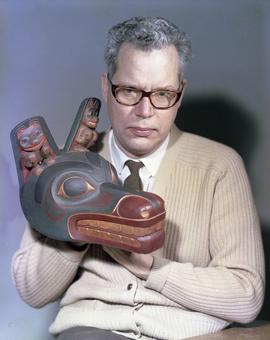 The file contains images of Northwest Coast artifacts located in unidentified First Nation villages, and in various museums in North America. The artifacts include masks, paddles, carvings, rattles, fishing equipment, and household items such as bowls and spoons. The majority of images from various museums include information about the artifact such as what it is, the museum it's housed in, and the artifact's catalogue number.

File contains images of Jim Hart's artworks, as well as him dancing at a pole raising and shots of him working in the Museum of Anthropology, UBC. In addition this file contains textual records such as correspondence both with and about Jim Hart.

File contains images of Stan Green carving outside his workshop as well as close up images of his masks. In addition is coresspondence between Stan Green and Darrin Morrison inviting Green to speak at an event.

File contains images of masks housed at the Smithsonian Museum of Natural History.

File consists of records about Dempsey Bob such as a student paper and exhibit proposal. In addition are images of Dempsey Bob and his artworks.

File contains images of Northwest Coast, possibly Heiltsuk, artifacts including a mask, sculpture, and weapons housed at the British Museum.