Image depicts a human face, probably carved in wood. The image is cropped, but it appears that trees are growing behind this sculpture. This carving may be from Kitwanga, BC, as described by Read in his journal. 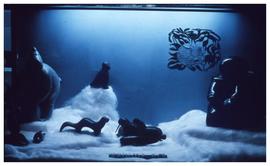