File consists of images objects and a publication titled "We Sing to the Universe: Poems by Ron Hamilton" for which Bill McLennan photographed the artwork on the cover. In addition, is a letter from Ron Harrison to Bill McLennan. 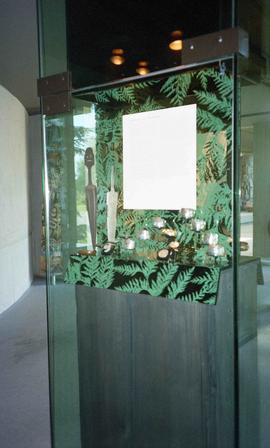 Item is a negative showing a display case with a green background. Inside the display case are pieces of Northwest Coast jewelry.

File contains 9 CD-ROMS (one of which is blank) containing digital images of bracelets held at various museums in Canada and the United States. Some of the CDs also contains digital copies of textual records listing information about the bracelets. The photographs contain images of bracelets from an unspecified museum exhibit(s). The textual records are photocopies of CD covers listing the contents on the CDs.

File contains images of photographs, letters, and newspaper clippings used for background research for this exhibit. Other textual materials include inkjet copies of photographs of silver pieces featured in the <i>Signed Without Signatures</i> exhibit. The photograph in this file is a reproduction of a historic photograph with nine men, five sitting in the front row and four men standing behind posing in front of a wooden building. They are all wearing three piece suits.

File contains photocopies of images of silver bracelets held at the Royal British Columbia Museum. The file also contains print outs of the RBCM's online catalogue of various bracelets held in their collection. 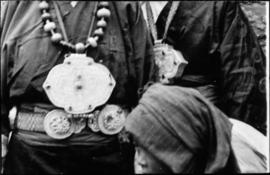 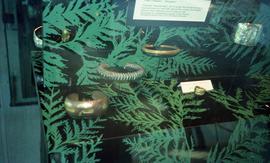 Item is a negative showing several gold and silver bracelets in a display case with a green background. The bracelets have Northwest Coast art engraved on them. 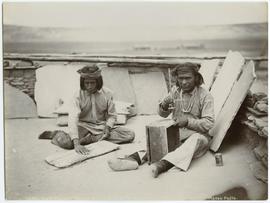 File mainly consists of textual records pertaining to a researcher looking for information about a bracelet in her possession. Other textual records include photocopies of images of the bracelet in question. The photographs contained in this file are of other silver bracelets on display at the Glenbow Museum and the American Museum of Natural History.

File contains photocopies of images of some of the silver work featured in the <i>Signed withot Signature: Works by Charles and Isabella Edenshaw</i> exhibit. 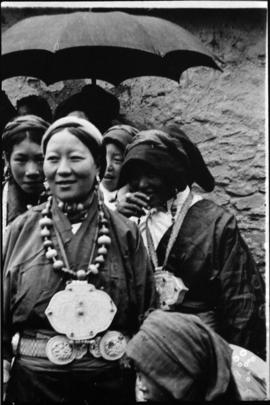 File contains copies of correspondence between McLennan and McMichael Canadian Art Collection regarding a loan of a silver bracelet in McMichael's collection. There is also a copy of a loan agreement, and an inkjet copy of the bracelet in question.

File mainly contains images of silver bracelets and other silver metal works on display in an unnamed exhibit. The textual records includes print outs of catalogue records for spoons and bracelets held at the American Museum of Natural History (AMNH). There is also a copies of correspondence between McLennan and the AMNH regarding a loan made to MOA from AMNH.