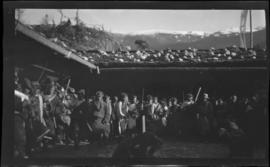 Item is a negative showing a group of Tibet soldiers standing in front of a stone wall.