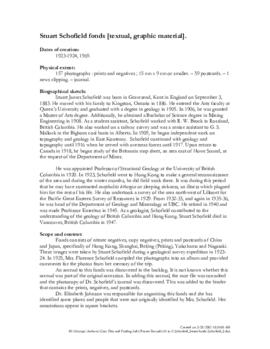 Stuart Schofield was born in Kent, England. After moving to Kingston, Ontario as a child, he completed his B.A. (1904), M.A. (1906), and B.Sc. (1908) at Queenʹs University. He later completed a Ph.D. at M.I.T. (1912). He began his geological career with the Geological Survey of Canada as a student assistant to R.W. Brock in 1906. In 1915, Schofield accepted Brockʹs invitation to start courses in Geology and Mineralogy at the newly‐established University of British Columbia. He was appointed professor of Structural Geography at the university in 1920. After accepting responsibility for making a geological survey of Hong Kong in 1906, Brock sent Schofield to undertake a general reconnaissance for six months. Ill health forced Schofield to retire from UBC in 1940; he died in Vancouver in 1947.

The material was in the custody of Vernon Wellburn before being donated to the Museum.

Nitrate negatives are in fragile condition. Copy negatives can be found in the Schofield fonds binder with the remainder of the material.

Material was donated to the Museum of Anthropology by Vernon Wellburn in 1987. An accrual of 10 photographs, 6 postcards, and a news clipping were donated by Frances Wellburn, daughter of Schofield. This accrual was discovered in the Archives backlog and it is not known whether or not it was part of the original donation.

An attempt has been made to keep the photographs in the order that they were placed in the album. This has caused some inconsistent page numbering. Also, some of the items are missing and this has been noted in the caption list. When this occurs, the caption is given that appeared on the album page although there is no accompanying image.

The original nitrate negatives for these prints are located in the Archives.

Access restrictions apply due to fragile nature of the material. See Archivist for details.

See attached pdf document for finding aid with a photograph caption list. This caption list was created originally by Dr. Elizabeth Johnson. She further clarified some locations and her additions appear in square brackets.