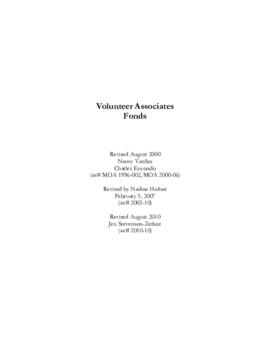 On March 15, 1976, a steering committee was formed to realize a programme of volunteers at the Museum of Anthropology. Sixteen volunteers made up the organizing committee. In April of that year, 34 interested volunteers took part in a general meeting, and the steering committee served as the executive for the following year. Because of the Museum of Anthropology's relocation from the library's north wing to its present location, the steering committee was initially primarily concerned with tasks related to the official opening ceremonies for the opening of the new museum in May of 1976. In 1977, the official policy for the Volunteer Associates was put in place. Originally the volunteer associates were known as the Friends of the Museum, but ca. 1979, the volunteer committee changed their name to better reflect their commitment to the Museum. The purpose of the Volunteer Associates is to provide assistance and services to the Museum of Anthropology and members of the public, and to provide a fulfilling experience for the volunteers. The Volunteer Associates are a self-administered organization with an executive committee working closely with the director and staff members. The organization is made up of committees, and members' work with the head of their committee who in turn coordinates activities with a staff member.

The fonds consists of the following series:

Audio tapes that are a part of the volunteer associates fonds are housed with the MOA series of the audio records.