File contains information about the Gaatuwas: "People Gathering Together in One Place" event held in the village of Bella Bella. 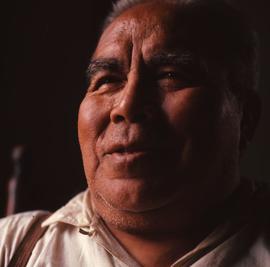 Portrait of Mr. Freeman, seen from neck up. Similar to image printed on page 32 of the book Somewhere Between.

During their time living in Bella Bella, the Houstons took many photographs of the lives of the Heiltsuk First Nation community documenting the day-to-day lives of the Heiltsuk First Nation as well as ceremonial activities. The colour slides document the construction, painting, and launching of the Gi’wa, a Heiltsuk canoe which sailed with the Lootaas, the Haida canoe built by Bill Reid for Expo 86. Some of the slides document the welcome feast at Bella Bella in honour of the Haida crew of the Lootaas. The colour slides also document several potlatches and wedding feasts held in the community hall, and the local Sports Day parade. Slides also depict the role of the fishing in the community, such as smoking salmon and processing roe. Other photos document gravestones on a nearby cemetery island, derelict canneries, petroglyphs and pictographs, totem poles and house posts, all in or near Bella Bella.

File contains images of various townspeople living in Bella Bella. The textual records include correspondence between McLennan and the United Church of Canada/Victoria Library Archives and catalogue cards from the five photographs included as well as from others.