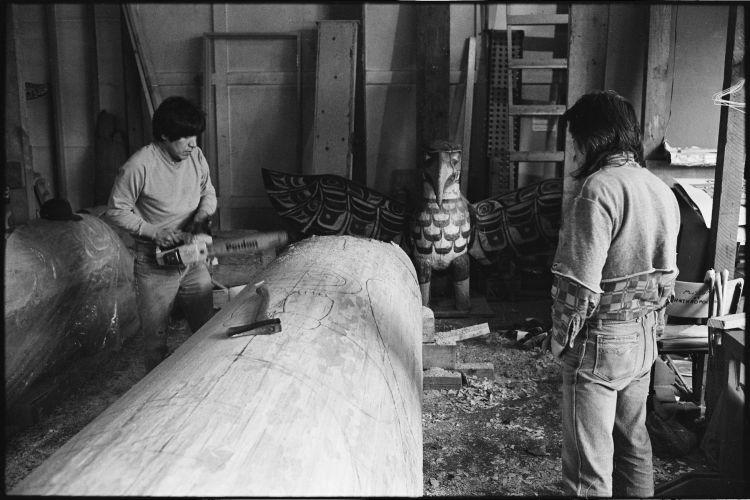 Crew and log at the old UBC carving shed

Item is a b&w negative of a photograph of the continuation of the work on the pole. Norman begins his first chain saw cuts into the pole (top figure). Chip immediately calls the rest of the crew to come watch and imitate everything Norman is doing. Norman making initial sketches on the log more definite, then doing first cuts. The textual info is in WHERE THE PEOPLE GATHER or paperback TOTEM POLE CARVING p. 50-51.)
Notes:
Norman makes his initial rough sketches more definite and has crew members doing some tracing onto pole.
The work shows this second stage of doing rough cuts on the totem pole: getting the design on, plugging any damaged areas, making the first cuts, cutting all the figures, designing and cutting any add-on pieces, making the background uniform. This stage is hard manual labour, with the carvers using bigger adzes just to clear away a lot of wood. It should be noted that there’s no really easy delineation between these stages because some figures are worked ahead of others. But the change is signaled by switching from heavier tools (2-handed adzes and mallets) to smaller ones (single-handed adzes and curved knives).
There’s an immense change as cuts are started on other figures—it’s the end of “rounding the log” and the start of “roughing the pole” (meaning rough-cutting the pole).