Fonds consists of records created by McLennan during his employment at the Museum. Fonds has been arranged into six series. The first series is titled Exhibits and relates to McLennan’s role first as a designer and photographer of exhibits and later as a curator of exhibits. Each exhibit is arranged into a separate subseries. Some of the photographs were taken by staff who worked for McLennan.

The second series is titled Projects and events. This series relates to McLennan’s role as photographer. He has recorded many events and documented projects through the use of photography. On some projects he also took on the role of designer.

The fourth series is titled general research and contains materials related to McLennan’s research in art on the northwest coast of British Columbia. The research series has been sub-divided into four sub-series: museums, archives and subject files, artist files, culture photographs and books.

Additional digital records from this fonds are still being processed and will be added to this finding aid at a later date.

Fonds consists of photographs taken by Virginia Small’s husband, Harry M. Small during a trip to Japan between 1920 and 1922. Photos depict a variety of scenes from rural and urban life including craft and silk production, farming, fishing and ceremonial activities. In addition, the fonds includes photos, both posed and candid, of various individuals including members of the traveling party, as well as photos of landscapes and architecture.
Some photos are marked with the subject, date and location on the back with pencil.

Fonds consists of seventy-three slides of New Guinea and includes images of markets, buildings, local inhabitants, and landscapes in and around Lae, Goroka, Port Moresby, and other unidentified locations.

Fonds consists of theatre programs from Victoria, opera clippings, photographs of the Chinese Carnival in 1936, a copy of the Chinese Times, and Yip’s reminiscences of the establishment of The Chinese Canadian Times in Vancouver and the Chinese Opera in Victoria.

Fonds consists of photographs that mainly document bombings in Shanghai by military forces from Japan in 1937. It is likely that the photographs of two bombing incidents were taken when Victor was a member of the Shanghai Volunteer Corps. The images show the devastation caused by the bombings including streetscapes and details of blown out buildings and dismembered casualties. Other photographs at the beginning of the album are postcards of Shanghai in its heyday before the bombings. Textual documents are from the 1930s and 1940s and include registration cards, a birthday card, a passport as well as identification cards of Victor, Valentina and Elizabeth. 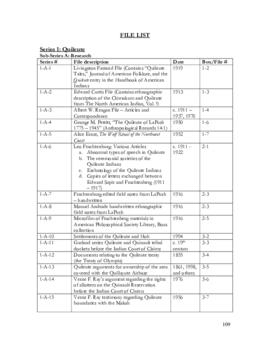 The collection includes material relating to Alert Bay that was created or collected by Thomas and Mildred Laurie, as well as photographs and textual records created or received by James Barclay Williams, who bequeathed the records to Mildred Laurie. The collection includes a photo album, photographs, postcards, correspondence, newspaper clippings, pamphlets, and a calendar. Photographs document Alert Bay and the surrounding area, including the B.C. Packers store, Christ Church, the native cemetery, St. Michael’s Residential School and Preventorium, Canada Packers, Hardy Bay, totem poles, a long house, and the Nimpkish Hotel. Photographs also document local events, including potlatches, weddings, an outdoor salmon barbeque, BC centenary celebrations in 1958, native ceremonies, and a visit by the Governor General.

The material is arranged in the following files:

Documentation includes a lists of recordings with tape descriptions, a short biography of Karen J. Clark, and letters and documents related to her awards and publications.

Textual materials include three "Tahltan Native Studies" books, two sets of accompanying job cards, one set of activity cards, one set of photograph cards, and a course outline. The collection also includes the three book set "Sun, Moon and Owl" and the accompanying reading workbook and teacher's guide. "Sun, Moon and Owl" was written by Karen J. Clark, with grant funding from the B.C. Teacher's Federation, and published in 1975.

Fonds consists of photographic material created by Dr. Stephen Inglis and a series of twenty-four black and white prints depicting potters in a small community in India or images of fertility statues photographed by colleague Walter Huber. The colour negatives show local artisans and their works. The black and white photos mounted on cards were created between 1974 and 1977 and show Indian craftspeople, particularly Bengalis and Tamils. The images may have been created for the purpose of Dr. Inglis’s PhD research.

AC2002-22-001 22-160 are black and white photographic prints mounted on white card. The images depict local Indian craftspeople, particularly Bengalis and Tamils. Some are identified with location and what is happening in the photo, while some are unidentified.

Fonds consists of scans of two albums of photographs and one enlarged photograph captured by Stanley Read during two separate vacations through interior British Columbia with his wife, Ruth. Also included in the fonds is a scan of a journal which Stanley Read used to document the daily events of one of these trips, during which Stanley and Ruth travelled through Gitksan territory/Skeena Country. The photographs capture Gitksan totem poles, people, and wilderness encountered on their travels.

The fonds is arranged into files based on the content and medium of the records.

The fonds consists of records relating to Skooker Broome’s function as a designer and as a coordinator for building services at UBC's Museum of Anthropology and contains detailed records relating to producing, planning, designing, and installing exhibits at the Museum of Anthropology. Records include correspondence, drawings, notes, memos, minutes, reports, photographs, proofs, labels, and other materials.

The fonds is arranged into three series: