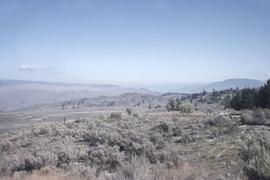 Image of hills and high desert shrubs in the Fraser Valley, near the community of Lillooet.

Images of rocks or fossils, masks, a paddlewheeler that houses a library, and a chapel or shed with graves in the background. Images of petroglyphs appear faded.

Contains images of a family trip to Lillooet.

Chief “Bob” Selqua of Pavilion – Lillooet Indian village. Says his ancestors painted a man pictograph every time a chief died. The pictures of stars around one of the men indicate his greatness and some of the pictures represent bear tracks

Series contains records relating to Jensen and Powell’s work with the Salishan language groups in Musqueam and Shalalth territories, and events related to those communities. Although the records were created in a number of villages at different periods of time, Jensen and Powell arranged them together due to the linguistic connection they share.

In 1975 Powell received an Urgent Ethnology grant from the National Museum of Man (Now the Canadian Museum of Civilization) to do linguistic work in Kitamaat. However, this work fell through, and Powell contacted Arnold Guerin of the Musqueam band to discuss using the grant to prepare materials for Guerin’s Hunqum’i’num classes. Together they planned to produce three books: one of phonetics, one on grammar, and one on maths, with Jensen’s assistance in the layout and photography. From reel-to-reel recordings Powell and Paul Thiele of the UBC Library for the Blind produced cassettes to accompany the books. Only the first book was completed as planned, but Powell adapted the notes they had already taken to create two books for younger children. All of this resulted in Musqueam Language: Book 1 and Hunq’um’i’num for Kids: Books 1 & 2. Three years later in 1978 Leona Sparrow hired Jensen on grant money to teach a black and white photography course.

In 1989 the principal of the Shalalth School asked Powell to work with the band on language books. With Harold Oldman and Bev Frank he compiled materials for two books, which were not published. He also completed an alphabet sheet for the community to use.

Series also includes photographs taken by Jensen in 2003 of a ceremony returning city land to the Musequeam near Vanier Park.